Supper at The Market Restaurant.

I guessed the location of my mystery birthday supper last night as Peter gave directions to the cab driver - The Northern Quarter could only mean The Market Restaurant where I hadn't eaten for years. The Market is one of those restaurants which becomes somewhat of an institution after being around for many years from the days when the now super-trendy Northern Quarter was a seriously non-cool and somewhat sad former rag-trade area. I'd always perceived the MR as a bit of a secret hiding in a dodgy part of town and would frequently hear rave reviews about it. I always used to enjoy reading the prettily illustrated menu which was printed in every issue of the now deceased City Life magazine. I recall eccentric opening hours, a lovely quirky interior and mismatched antique glasses and crockery and a great atmosphere with excellent front of house service and of course splendid food.

So I was delighted at the prospect of my first visit after a very long time, it could have been as long as ten years ago when we had an excellent Sunday lunch. We arrived and sat at our choice of table - it was less than half full I think, it's a very small space downstairs with another room upstairs. The bar is in the middle of the room and I sat facing the bar as I like to see what's going on, I like to see what's happening when the staff aren't interacting with customers - I think you get a very good insight into a restaurant this way....

We started off with Henriot Champagne with raspberry liqueur - rather like Kir Royale, but a bit more subtle. It was £7.50 a glass and came in a very pretty Henriot branded glass but it was minute and definitely not worth the money and I'm afraid that we did mention this to our waiter and he very kindly came back and topped up our glasses when we'd polished them off.

We both ordered Gazpacho with goats cheese and basil tortellini (£5.25) I adore gazpacho, it's one of my all time favourite dished, I love to order it in Spain where you get a whole plethora of exciting goodies to sprinkle on to the soup - croutons, garlicky mayonnaise, chopped cucumber, tomato and onion....fun and delicious! I also love to make it, it must the easiest soup in the world to make - just fling gloriously ripe tomatoes, fresh green cucumber, red peppers and garlic (some recipes incorporate bread, but I don't like the slimy result) into the blender and add water to the right consistency, either chunky and rustic or sophisticated and smooth. Then you chill it to within an inch of it's life. The most important thing is that it's super cold, I've even served it with olive oil filled ice cubes to make sure that it's perfect when it arrives at the table. That's the whole point of the dish, like crispy roast potatoes, or a melt in the mouth steak. So imagine my disappointment when it arrived without any goodies to sprinkle and shock horror, was actually tepid if not slightly warm. There were three tortellini and I was disappointed and very surprised to find that it wasn't cooked through, and had that nasty raw flour hard-centered bite to it. I couldn't really taste the goats cheese or basil through the flavour of uncooked flour. So once I'd managed to attract some attention, it went back to the kitchen to be 'made again'. About fifteen minutes later it re-emerged looking exactly the same with the addition of three ice cubes. The soup was still tepid and the tortellini were still uncooked. We drank the soup and left the raw pasta. I refrained from mentioning that the soup was tasteless as I thought that might be a bit much.....but there was no garlic, no punch and no zing. It was a bit like a tinned tomato soup left to cool a bit. The starters were removed from the bill. 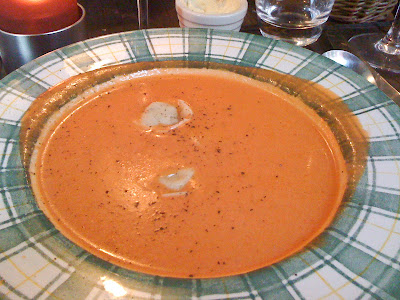 The first soup - you can tell the pasta is uncooked just by the lack of 'glisten'. 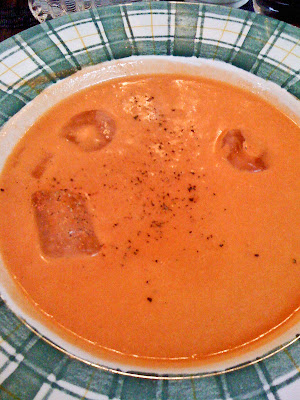 The second soup - spot the ice-cubes!

For the main course I was going to chose the Pan fried sea bass, vanilla mash, butternut squash, hazelnut crusted scallop (£17.95) as I love sea bass and scallops are always a real treat. While I was pondering two portions of this dish arrived at the table next to us and there was the biggest serving of mash you could imagine with two tiny little fillets of bass - it really didn't look like £17.95's worth so I changed my mind and chose instead Hake wrapped in Parma ham, broccoli puree, roasted potatoes, red wine jus (£15.95) which turned out to be an excellent choice. The portion of hake was very substantial, thick, white and flaky. The Parma ham was just the right side of salty and meaty, the broccoli puree which I didn't fancy at all was lovely. I'd ordered new potatoes rather that roast and they were obviously reheated as they were too soft and squashy, but I didn't really want spuds at all, so wasn't too bothered. Peter had duck which he'd been informed would be cooked pink, but it wasn't. He declined to mention it. We drank a very nice bottle of French Voignier (£18.95) which wasn't sufficiently chilled and had to be put in a wine bucket to cool further, this had to sit on the floor as there wasn't room on the table. 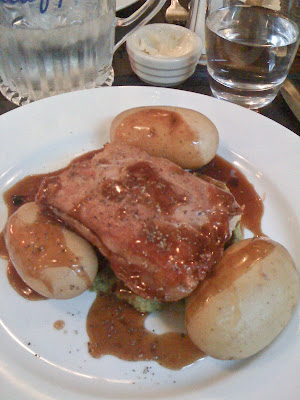 For pudding we both had chocolate mousse which was delicious, very dark and with that lovely French texture which comes from not using cream in the recipe, just eggs and butter (I didn't ask, but it's how the mousse I make at home feels). It was rather bizarrely and pointlessly served with stale popcorn dotted around the plate - I don't know if I missed something there, but I didn't get it at all! We had a glass each of delicious sticky wine - Muscat I think it was, perfectly chilled and seriously yummy. 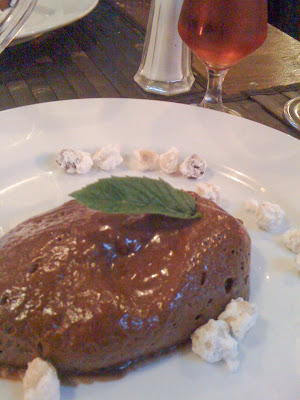 Then there was the birthday 'cake' which was a shot glass of elderflower Eton mess with a very nice raspberry sorbet and a chorus of Happy Birthday from the two waiters! 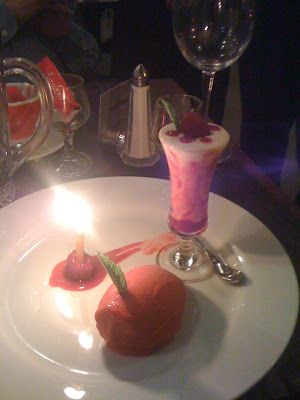 So not a perfect evening but a most enjoyable one!