As the weather was unexpectedly delightful this afternoon with warm sunshine instead of the forecast rain that we popped out for lunch to sit in the sun and watch the world go by.

Silver Apples hadn't quite opened when we got there, so we went a few doors down to the lastest cafe on Burton Road, called Love 2 Eat where we've been meaning to go since it opened, but it's always been full.  It's a tiny little place with four tiny little tables outside and we were lucky enough to find one empty. 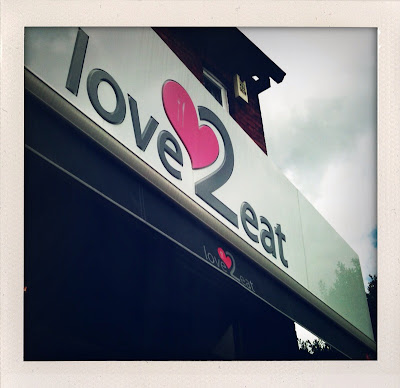 The menu is pretty small and on blackboards on the walls inside (there's a proper menu on the website) with sandwiches, soups, pies and the odd casserole.  There's a glass fronted deli counter with cakes and pies all looking tasty.  There's a great collection of cookery books dotted around (even in the tiny, very clean loo out at the back), I could have a jolly good browse through them and have my eye on Moro East for next time.

I went for a hot apple juice cured ham sandwich which came in a nice thin brown baguette and I narrowly avoided the horror of industirally produced coleslaw as I'd spotted it come out to the ladies next to us who also had baguettes.  Our kind waitress instead gave me a portion of really delicious tiny new potatoes drenched in butter with fresh herbs, much nicer than oniony coleslaw smothered in cheap mayo.  There were very nice salad leaves which were almost all manky which was a shame, but for some reason, I did eat them.  The ham was in nice big chunks like it had just been hacked from a propper piece of meat which was a pleasant surprise and was nicely appley but not too sweet.  Some rather odd orange chutney came in a wee espresso cup which once inside the bread with the sad leaves and tasty ham was good. 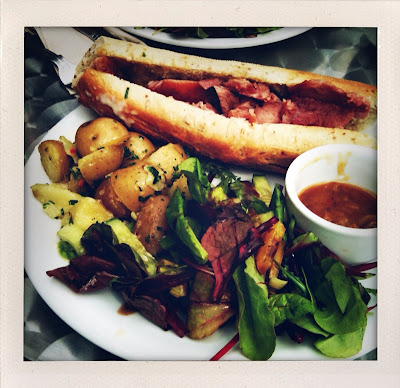 Being greedy we shared some 'bounty cake' which was a lovely light sponge with little coconutty bits and a rich chocolate icing on the top and in the middle, it was a bit dry but still enjoyable.  The tea somewhat bizarrely, came with little jugs of frothed warm milk, not exactly ideal for tea, but it was okay and we were running a bit late and didn't have time to ask for some more. 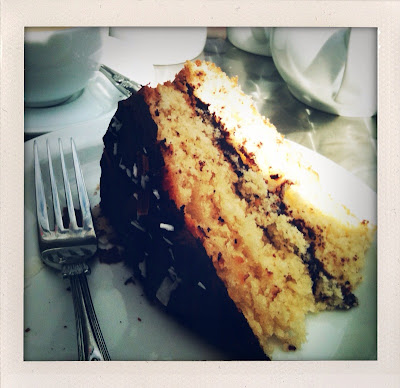