Often on New Year's Eve we're very happy to just spend the evening at home with some nice food, fizz and usually Jools Holland on the telly - how middle aged does that sound!?  Going out becomes a hassle as you've got the taxi issue if you're not offered a bed by your hosts and that's a pain and a dull end to a nice evening, so that's why we often stay in.  This year we were planning the same but our neighbours called to say they were coming home and did we have plans so of course we invited them round and two more friends so I was planning a meal again.....We had three omnivores, one fish eater and one pregnant lady, so no meat, raw fish (was thinking of sushi for a starter), no raw egg (was considering chocolate mousse) and no unpasteurised cheese.  So a menu was forming:

Spiced pumpkin laksa.
Nice a spicy and coconutty, a perfect soup for a cold night, I'd never done this before and wasn't too thrilled with it, there was a subtlety of flavour lacking somehow, a late addition of nam pla made it a bit better.  Everyone seemed to like it though.

Whole baked salmon with tomatoes and salsa verde.
A tried and tested favourite, very simple but impressive.  It's a whole salmon filleted into two pieces, laid on a bed of tomato, capers and garlic, with a layer of salsa verde making a filling between the two pieces, then baked in the oven.  The hardest part of this is serving it as it's nearly impossible to slice through two seperate pieces of soft fish with a differently textured filling.  It totally fell apart, but tasted lovely! 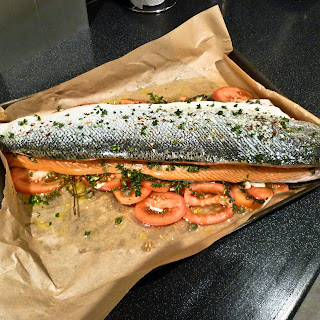 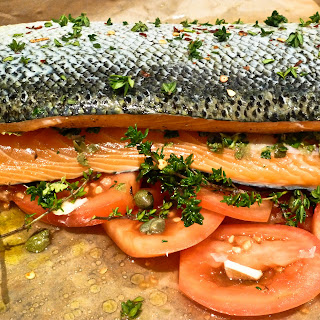 We played the Logo Game after food and helped along by several bottles of fizz, the baklava, some Carluccios chocolate stars and a smattring of advertising and marketing people who knew almost every single answer we arrived at midnight very happily.  We popped out on to the terrace in the freezing cold and crystal clear night with Jools in the background (we had to fit him in somewhere) had more fizz and watched the fireworks erupt around us.