Today my online life was more exciting than my real life!

No, I'm not sinking into some deep dark depression, I just went to Oldham in the very cold, dull, post fog, pre sleet weather.  I had to make it look like Paris.  I don't think I did too badly - Lightroom is a wonderful piece of software which has performed magic for me so far, but it was a very cold and not particularly fun assignment.

After my initial forays around the church, my poor little fingers were frozen so I headed to the Art Gallery for a warm up and a toilet to find that there was a nice looking new cafe where I happily settled with a copy of' Om a very cool yoga magazine (a rare British one too) and ordered chunky veg soup and brown bread with a pot of Earl Grey tea with extra hot water.  What I got was a cup of Earl Grey tea with a jug of milk and a jug of hot water and no soup.  I was happy thawing out and reading about Downward Dogs etc.... but eventually I got fed up and reminded my very nice but inefficient waitress about my soup.  She assured me it was coming.  It didn't, but it did for the two ladies next to me.  They took one slurp and called the waitress over and complained that it was so salty that they couldn't eat it.  Great.  I waited some more, no doubt while they 'seasoned' it a bit more.  Eventually it arrived, and had that depressing smell that home made soup never has.  I make a lot of soup, both vegetable and chicken based and it never has that instant soup out of a packet smell which I remember from school.  That aside, the unattractive brown gloop tasted sort of okay, but the carrot (yes, nice and chunky) tasted like a spoonful of salt.  Back it went.  And the bread was a pappy white roll which had been cut in half for me very helpfully through the middle.  The tea was very nice.

The manageress offered me an alternative, but I'd wasted enough time and I told her I couldn't wait any longer and she offered me a sandwich to take out, but I very nicely turned that down too.  The soup was erased from the blackboard and she apologised and said that they had been using a 'new stock'.  What sort of kitchen buys in stock when the soup's meant to be home made and what sort of chef doesn't taste his cooking?

Very disappointed but at least a bit warmer, I pottered off to find something else to photograph.  I was very surprised at how little modern stuff there was, perhaps I missed it?

The nice on line stuff came in the form of a Front Page Treasury with my Red on White 2 print. 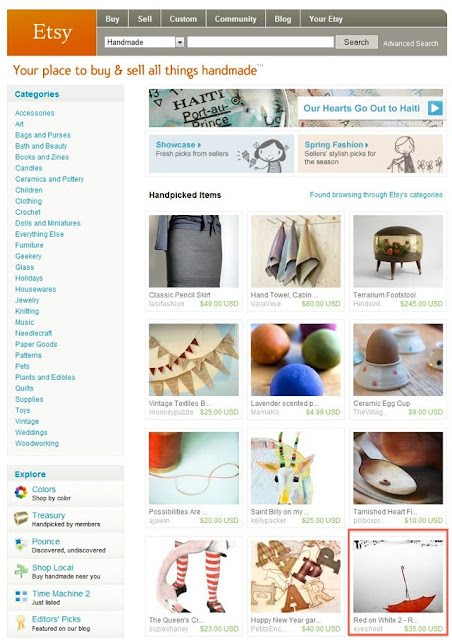 And the second nice thing was a feature by the new UK Etsy Blogger Amity UK in The Storque in her 'Get the Look' feature about the wonderful flame haired Florence Welch which is full of great items.

Here's a screen grab of the section with my Have a Seat 4 print: 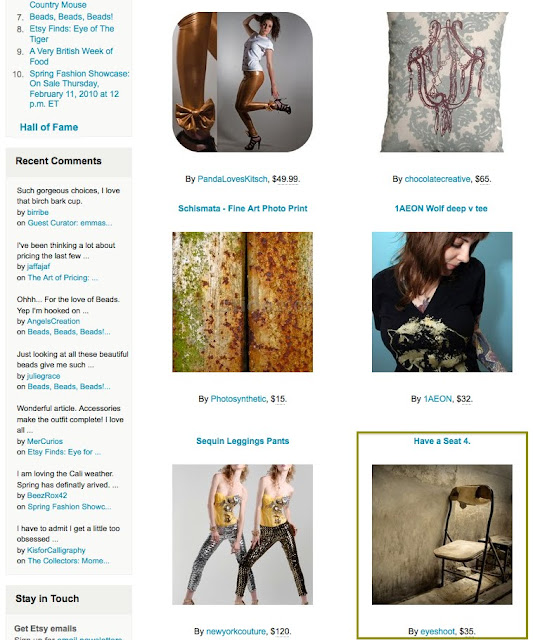 So I'm well chuffed with that!

Tomorrow I'm out and about doing some more real work (two days proper money is a very nice thing indeed!) down in Derby.  Not quite sure what to expect, but I hope the sun shines for me on my ninety minute drive.