More fun and games with Photobox 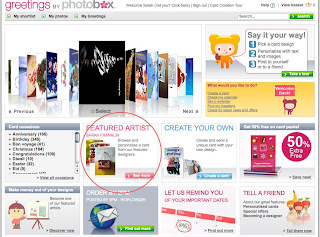 I've had some card designs on Greetings by Photobox for some time now and don't seem to have made any sales so far. I've been waiting for their designer's admin area to appear and it has finally done so. I logged in and clicked the appropriate link and ended up seeing someone elses details, there wasn't much to look at, so I hope he doesn't mind if he ever finds out! It seems rather odd as I'm their so called Featured Artist on the front page, which is of course nice, but when you click on the link there's nothing of any use, it doesn't lead to my card designs at all, so it's all rather pointless. I spoke to support and the guy was useless and said he'd pass the issue onto his manager who would phone me back. They promised this when I had another reason to call and I never heard from them.....so I'll wait. In the meantime, I logged out and in again and clicked on another link and was directed to fill in my Gallery details, which I did as I was interested to see what happened. I followed this through and even designed a card with their new web based process. When I had saved the card I clicked on my name link and found that I now have two galleries, one with all of my original cards and the newly set up one with the single card. What a mess - I really hope they can sort it out.
Posted by eyeshoot at 12:25 pm

Email ThisBlogThis!Share to TwitterShare to FacebookShare to Pinterest
Labels: Greetings by Photobox