Lunch at The Knustford Wine Bar

The Knutsford Wine Bar is one of those local, small town restaurants which seems to have been there forever but never seems to change, which in this case is a good thing. I've been eating there on and off for fifteen years, less in recent times, but it's always been a good bet for a good meal and nice atmosphere. The building was a Century Chapel in the 14th and then a Parish Church, and is full of atmosphere with a lovely big open fire. The ambient temperature is always a bit odd in there as you can get the most awful drafts if you sit just on the edge of the balcony on the ground floor or you can be baked by the fire, but in my experience, if you take a range of clothing. We were sitting sort of behind the door, sort of near the fire and sort of in the vicious updraft area near the end of the balcony, so it was hot/cold/hot/cold.....

Anyway, we were to meet four friends who we don't see nearly enough of for a catch up on the last six months' goings one and they chose the venue.

Our oven and hob had packed up on the Tuesday before and I was very fed up of eating out and eating cold bought stuff from the supermarkets, so I was really looking forward to some good hot food and plenty of crisp green veg.

Here's what I had.

This certainly looked the part with the two nicely sized prawns which tasted of pretty much nothing and had the texture of defrosted seafood, you know, that sort of soft slightly spongy mouth feel. The avocado guacamole thing was tasty if messy and the sweet peppers were okay, if nothing special. There was tons of chilled and crisp iceberg lettuce but all the dressing had dribbled down to the bottom of the glass so there was a vague essence of Marie-rose sauce throughout, but a puddle of it below. With some careful salad tossing, I was able to distribute it a bit better. Marie-rose sauce really should be thick and have a bit of cling. Some nice soft but crusty French bread to dip would have been good. But despite my complaints (here, not there), I did enjoy it. 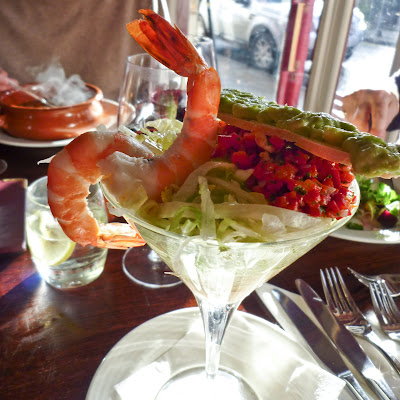 This was much more successful. I did ask for the duck to be pink and it wasn't but it was very tender and tasty, so I restrained myself from sending it back. I was too hungry to fuss. The creamed beans were delicious and really creamy, I'm assuming that there was cream added to them and it made a nice change from potato. I always love Puy style lentils and these were good, rich and meaty and the carrots and onions were nice but not particularly exciting. A very nice Sunday lunch main course. 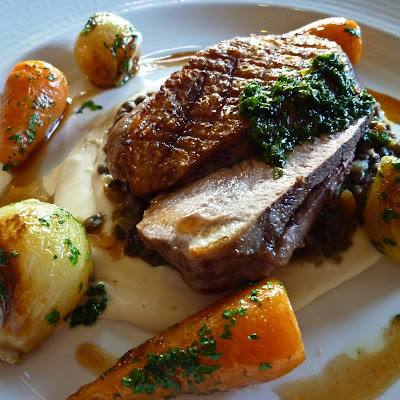 This was Peter's idea......It sort of worked, the chocolate was nice, but far too shallow in it's pot to really dip into, there were no spoons for extra greedy spooning, the honeycomb was so sticky as to be almost inedible, the brownies were yummy, the chocolate chip cookies were shortbread and the fruit skewers were feeble - orange and grape - who wants to dip orange and grape into chocolate? Where were the lovely big strawberries and pineapple? So a sort of fun pudding, but we'd have been better off with some cheese I suspect. 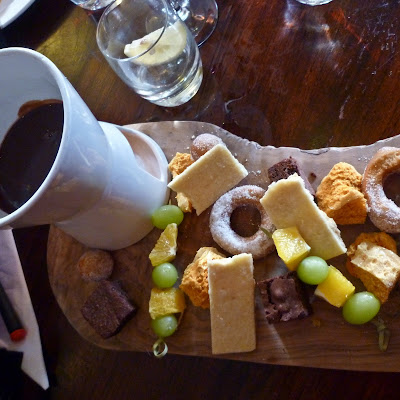 I've moaned about the food a bit, but there weren't any major horrors, just my normal low level complaints. I didn't get my crisp green veg, just some rather over steamed broccoli as a side dish. Despite this, we had a very enjoyable time with our friends and I'm sure we'll be back again.

Email ThisBlogThis!Share to TwitterShare to FacebookShare to Pinterest
Labels: eating out, Knutsford, restaurant