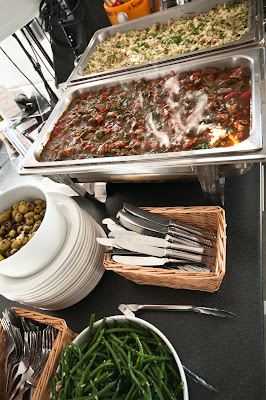 We had Peter's Xmas works do yesterday. For the first time we decided to have it catered at home because in the past we've been to various nice restaurants and had their set meal things which is usually okay, but it does cost at about £25 each plus the wine, you end up on a long table so you can't talk to everyone and you have the noise of a restaurant full of other people and the hassle of attracting the staffs' attention. So if we were going to pay for the event we wanted it to be a bit more relaxed and a few weeks ago we'd been to a friend's birthday do and they had great food so I found out who the caterer was and we were set to go.

The food was cooked by Back's Deli in Manchester and it was excellent, they have a very extensive menu of very tempting things, but I wanted to keep it simple and ordered for the main, Moroccan Spiced Lamb with Apricots, served with CousCous with Garlic Green Bean Salad, and for nibbles they marinaded some stone in green olives in some Moroccan(ish) flavours. All of the food was delicious, especially the green beans which were seriously garlicky. All of the hot food arrived in chafing dishes, the cold things I decanted into my own bowls, all the crockery and cutlery was provided even small plates for the pudding which I didn't buy from them, which I thought was very nice. Everybody ate their fill and then all the empties and dirties were taken away as if by magic at the end of the afternoon. Perfect!

We'll be eating the leftover lamb for ages....which isn't such a bad thing. I think it will make a fantastic spicy pasta sauce.

The hob man came yesterday as well, just before the food arrived, and now we have half a working hob which is an awful lot better than the no working hob we've had for almost two weeks. There's a little bit of rewiring to be done next week and then hopefully the whole thing will work. Fingers crossed...

Email ThisBlogThis!Share to TwitterShare to FacebookShare to Pinterest
Labels: food