I seem to have spent all weekend eating!

It's been a busy few days.....
We returned from a very intense but successful trip to Holland, a 4.30am start followed by a 5.00am start isn't my usual schedule, but I survived!  The rest of the week passed in a normal fashion with the added excitement of subjecting my car to it's annual MOT and subjecting my eyes/contact lenses to their twice yearly poke and prod at the opticians.  Both examinations were passed with flying colours.
Friday was a good day on the Etsy front as I found out that I'd been featured in the Etsy Finds Euro Finds, Go Euro which was showing my April Calendar page in my new Sale section.  I sold two to one person, one plus May to another and a whole calendar to someone else and once I realised what was going on and that the last of my April pages was gone, I relisted the expired print version of the image which promptly sold too!  That was six items in about twenty minutes plus the fifth print to my lovely customer in Australia made a very good day indeed! 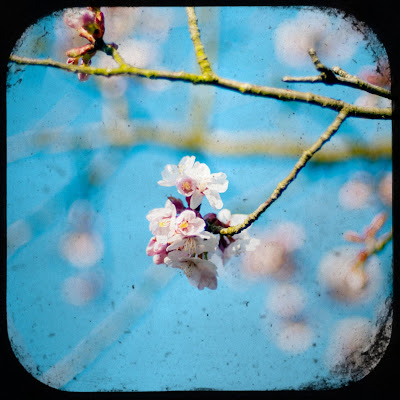 Pink on Blue $35 at Eyeshoot at Etsy
In the afternoon we had friends round for drinks and then a splendid supper at The Great Khatmandu where my choices were my usual bbq mackerel, tarka daal and plain rice, I don't think I even tasted the other dishes so my current phase of calorie counting wasn't too damaged.
On Saturday morning I met up with the Manchester Etsy folk and we had our monthly gossip and muffin gathering which is always a very civilised start to the weekend, a quick (that's quick to eat not quick to arrive) vegetarian chilli with hummous at Teacup followed and then home for newspapers and bit of catching up with the telly before our evening's entertainment.  We were destined for an evening of theatre at Joshua Brooks which was the venue for JB Shorts 3 which consists of six short plays all written by TV writers.  Apart from the fact that the venue was appalling, totally cramped, cold and uncomfortable it was an enjoyable evening with a nice variety of plays (each 15 minutes long) ranging from a very stylised party political party to a Big Brother wannabe.  Each one held my attention but I couldn't have coped with more than six.  A very good evening out.  Fingers crossed for a better venue next time.  From there we wanted food and had spotted ZOUK on the way in and liked the look of it, but when we got there it was totally packed and there was a forty five minute wait at 9.30 which we didn't fancy so we popped into Rice next door which was a bit odd really.  I've only just found out that ZOUK is an Indian restaurant, we all thought it was Chinese.  So it's probably a good thing we didn't go as Indian food on consecutive nights isn't such a great idea.  Anyway, Rice next door looked as if it would fit the bill with a range of noodle, rice and stir fry dishes.  I've never seen such a bizarre menu, there were dishes from absolutely everywhere, China, Japan, Jamaica, USA, Persia, France, Thailand, Mexico, Malaysia, Singapore, Spain, Morocco, Indonesia and South America!  Someone was a bit indecisive at the menu planning stages.  I ordered pad Thai with chicken which came nice and quickly, obviously just out of the pan, with lovely soft noodles and plenty of chicken, it was a massive portion but unfortunately totally tasteless but somehow managed to be enjoyable.....everyone else liked theirs but I think that the Persian saffron fish kebab sauce looked really suspect, but it was all devoured so just me then.  Home to bed, knackered.
Sunday started with Peter having a breakfast meeting at 9.00 I was up not long after that (actually 8 am as the clocks changed last night, so pretty early for a Sunday), a reviving breakfast of mango and cottage cheese did the trick and we were planning a leisurly day mainly at home until a chum phoned with the news that he will shortly be moving to Mumbai and did we want to join him and a friend for Dim Sum at Tai Wu at 2.00 - naturally we said yes, our stamina for dining out is unrivalled after all!
Dim sum was great, it's the first time we have been to that restaurant, the size and location had previously put us off and I'm very slow to adopt new Chinese restaurants as they are generally very disappointing.  Since we stopped eating at the Yang Sing I don't think I've ever have a truly fantastic Chinese meal, which is a shame as we really did take it for granted there for many years.  It was very good and unreasonably cheap at £35 for five of us, we had loads of steamed dumplings, a main course dish of gai lin, some steamed ribs and various things I don't know the names of.  We'll definitely go there again, it's a bit less hysterical than Glamorous and I think the food might be better.  I'd need to try some dishes from the main menu to make my final decision on that.  I think I'll be able to manage that!
Considering I'm meant to be on a diet at the moment I have managed to eat out four times this weekend.....I feel a bit of an epic session coming on at the gym tomorrow morning.
I'll sign off with this lovely Treasury (I've been watching the Treasury clock like a hawk for the last week of so as I have a lovely Poster Sketch lined up but seem to have lost my knack of snaging a slot.  Perhaps this week will be lucky for me!)
A Bunch of Hearts
by Anakim 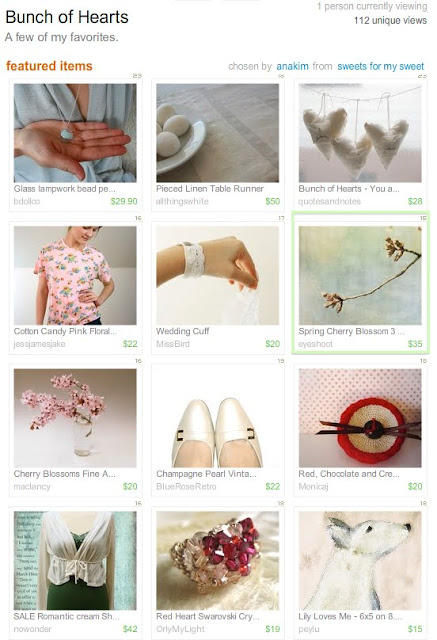