I've somehow managed to spend the entire day doing nothing creative at all!  I started by being woken up half an hour before my alarm by the outside intercom buzzer screaming at me, I had decided to ignore it, but they were very persistent so I staggered to the phone and surprise, surprise, no one was there.....So it was a fairly efficient start to the gym where I did my 40 mins iClimb workout despite my legs being very sore yesterday, it just didn't hurt but it was hard work.  Then followed a bit more of the squat and lunge with the Swiss ball against the wall which caused the super stiff legs of the past two days - I survived, but they still ache!  Weights and sit ups followed resulting in a handy 700 calories extra for my roast chicken dinner tonight.  Yes, I'm back onto counting calories as I seem to be getting a bit to soft round the edges for my liking and there's a rather lovely pair of Nichole Farhi linen trousers I'd really like to fit into with elegant ease in the next month or so and her trousers don't work on top of soft bits!
While I've been featured in so many beautiful Treasuries on Etsy lately I have been feeling a tad guilty for not returning the favour and creating any of my own, so I have.  I've worked away in Poster Sketch over an afternoon break with a cup of tea and a nectarine (59 calories!) and made a nice colour themed Treasury using UK sellers.  If I catch the slot it could be online in a couple of days.  I hope I catch the next opening as I'm out on a shoot all day on Friday and Saturday so will be absent from my Mac.
Anyway, here's a beauty by The Little Rooster to tide you over until mine goes live!
Mondo Azul
by The Little Rooster 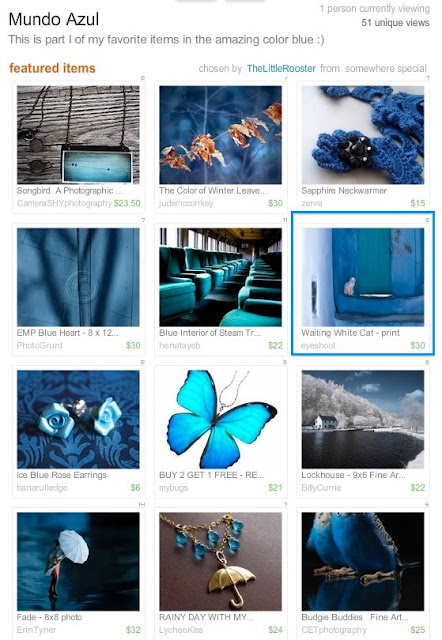 Thank you for featuring my Waiting White Cat print!
Posted by eyeshoot at 4:25 pm

Email ThisBlogThis!Share to TwitterShare to FacebookShare to Pinterest
Labels: treasury