It's been a while

I can't quite believe how long it's been since I've blogged. The computer problems still haven't been resolved and I don't have access to my entire catalogue of photos which is rather irritating to say the least. I've have a few shoots since I 'lost' everything so I've had some new stuff to work on, but it's not the same as not having my whole collection at hand.

Sales were good a couple of weeks ago, lots of card sets, two or three to a customer which was great, hopefully they'll be back for more, some custom print orders and quite a few items from my other shop, Inter Alia too. Now it's gone dead, but I suppose postage times to America have run out now and I don't have anything Christmasy at all. Let's hope the good sales continue in the New Year.

I've also not been checking the Treasuries for ages and today sort of remembered about them and found my Mansion House print in a nice POE one - it's always nice to have my work picked by another photographer! 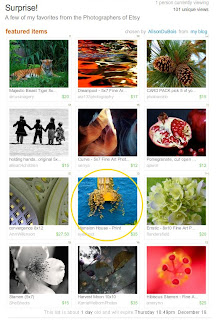