I've always kept an interesting eye on which of my photos the big, clever computers at Flickr think are the 'most interesting'. So I've made a mosaic of my top 100 Most Interesting. I'm always amused that out of the thousands of pictures I have at Flickr, it's often the ones of food and graffiti which come out on top. Many of the food ones are perfectly nice pictures, but just as many have been taken on mobile phone cameras, or in very dim light or just aren't very good at all, but they still get masses of hits. It's the ones from the big name restaurants like El Bulli and the Fat Duck so I suppose people read about them and then Google them and my pics come up pretty high up the image searches, it's not particularly flattering, but I shouldn't complain. As Flickr has such good stats it's interesting to see what's going on, for example one of my Banksy shots from Liverpool got about 5,000 views in one day. I've not managed to find out why. It wasn't on the front page of Explore (as far as I know) and I didn't get many comments. Very odd. 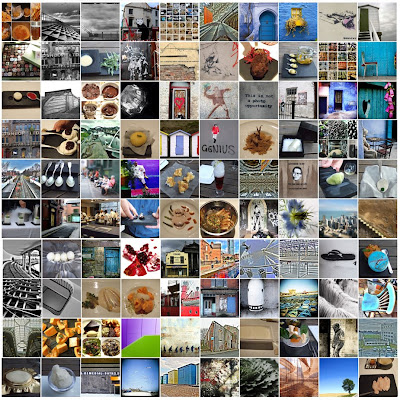 See all of these images bigger and clearer here.
Posted by eyeshoot at 3:41 pm