After rediscovering Red Bubble yesterday, being featured and blogging about it here, I've just made a sale! It's my third, which while not great, is better than a poke in the eye with a wet fish and I don't have the hassle of making and posting which makes me happy. It's my good old Ministry of Silly Walks image which is also my best seller over at Etsy too, all my Red Bubble sales have been of this image, one card, one laminated print and one mounted print. It does amuse me that it's such a popular image - the power of television comedy and all that. My pink on blue is now on the first page of Featured Art which is nice (bottom left corner), but I really have no idea how the display pages work here, I've not got as involved as I have with Etsy but I do think that the users on RB are a little less needy than on Etsy which I dearly love, but I do get a bit sick about the whinging about the Front Page and so on...... 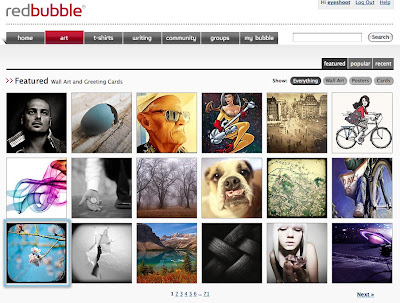 We're off to the private view of Garry Fabian Miller's new show, Time Passage, at the Abbot's Hall Gallery in Kendal later this afternoon. It's a bit of a schlep from Manchester for a long, late drive home, but Peter's hoping to do a bit of networking and so long as he drives home I won't complain too much!

I made some good progress with the wedding pictures yesterday, my test shots from Photobox came and they are a little darker than I was expecting, so I tweaked them all a bit brighter and lightened shadows thrown onto faces by hats (luckily only one key family member had a troublesome brim!) and faffed about with some effects, but didn't do any black and whites as it just didn't seem to suit the photos for some reason. I did add vignettes to quite a few and I really like the effect and the way it seems to emphasize the center of the image and add some light. Doesn't work on all of the images, but good on the outside ones.
Posted by eyeshoot at 1:36 pm