Which Photo is Better, Before or After?

I've been revisiting my old Morocco pictures and started to re-edit and re-tweak some of them as my skills have improved since I went through them for the first time and I've learnt some new tricks and have got some new plugins for Photoshop which I'm enjoying but am not quite sure about. Here's an example of a before and after of one of my favourite pictures from Chefchaouen: 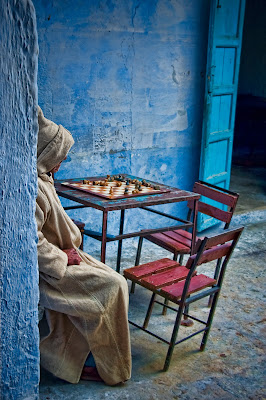 The After one looks a little softer on some of the edges despite all of the additional detail which has appeared but I like that where lots of extra colours have appeared in the floor and the extra texture on the wall and floor. I can't decide if the whole look is just too processed.
Any comments welcome!
Posted by eyeshoot at 11:05 am