We had an impromptu meet up with friends last night.  We ended up at the newish fish and chip shop down the road where Peter and I hadn't been before despite it getting very good reactions from friends.  I didn't really want to go as I'm in one of my sporadic trying not to be a total pig periods where I am generally careful about what I eat when I go out, try to exercise as much as possible and try to stay off the booze.  I've been at it for a week and it's all going well.  I went to the gym in the morning and been very productive and according to my heart rate monitor had burned a handy 900 calories or so (I don't usually go on a Tuesday, but as it turned out, it was just as well as no gym would have definitely been a no no for fish and chips!).  After a discussion lasting for about two minutes we ended up at Frankie's Fish Bar and it was really very good.

The décor is nice and simple with a real feel of a traditional fish restaurant.  The menu is pleasingly small and there's a tiny offering of wine, but we had tea and ginger ale instead.  We all went for the cod and chips which came with home made Tartar sauce and a wedge of lemon - the (Heinz) ketchup, salt & vinegar were on the table.  The seats are at the front of the tiny shop, the hot and smelly frying stuff is right at the back which is a very thoughtful layout as you don't end up hot and smelly during your meal.  If you want a take away you just queue (and queue they did) down the side of the shop.

There's some serious frying history behind this modern chippy, Frank Hayes, the grandfather of the current Frankie's people opened his first fish and chip shop in Stockport in 1949 and served meals there for 19 years! From here he was in the business in one form or another for many years. I think that it's great to have the latest product from such a long and successful line of fryers just down the road!  My waistline might disagree though......


The meals when they arrived were seriously impressive, the fish was golden, crisp and BIG.  Inside the cod was perfectly white and steamy hot and the batter was very nice indeed.  The chips were perfect, no little slimy grey offering here, just golden yumminess.  I ate almost every morsel! 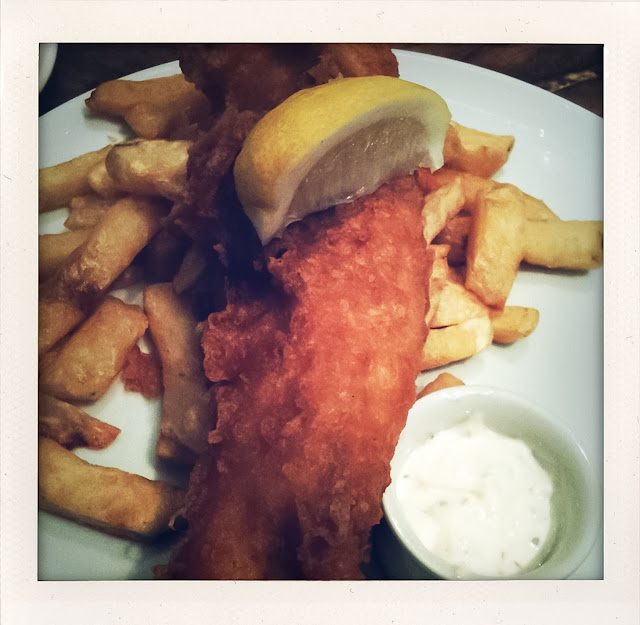