Indian Food through the ages. My ages.

I always hated Indian food when I was growing up. We had it rarely, but my dad liked a curry occasionally and we'd go to our local in Stanmore in North West London, it was called the Agra Tandoori which I (rather unkindly) called The Agro - I was only a brat, less then ten I think. I'd just have something English, probably an omelette. Then I was shipped off to boarding school and we had 'curry' occasionally and as far as I can recall it involved mince or chicken, raisins and even the odd bit of pineapple. Now can you see why I wasn't exactly keen. So I lived quite happily in ignorance of Indian food until I went to university in Stoke on Trent where if you wanted to eat out there wasn't really much choice apart from the mysterious (to me at the time) Balti houses with Al Sheik's being the chain I recall going to most frequently. I began to go there with friends who were more experienced in the Balti business than I so I learned from them. I did always fear the chicken and meat doubting it's provenance so I generally had vegetarian with the odd forkful of someone elses. It was good grub. I do recall one good friend of mine who I ate out with regularly always accompanied his meal with banana milkshake! Over the three years and for one or two afterwards I have very happy memories of some great times.

Then Manchester and the joys of Curry Mile or Rusholme as it's more correctly known. My mum and I used to go to a cafe type called Eastern Touch which was the best kind really, just simple stuff and a small selection. Then when I met Peter I found out that it was his favourite too. Indian still wasn't something I'd ever choose for a meal, I'd always prefer Chinese, Turkish or Italian but it was getting better. Anyway, fast forward 15 years or so and I'm a seasoned Indian Food Eater although I'm still very fussy and often will only have the vegetarian dishes if it's a restaurant I don't know or haven't chosen myself. Our absolute favourite is a cheap and modest little place called Al Faisals in the trendy Northern Quarter, it's not much to look at, but they do the best, freshest chicken tikka ever and served with some plain rice, salad and chickpeas I think it would count as one of my desert island dishes. We're generally found there on a Saturday with assorted friends having a mini feast with the aforementioned chicken tikka as well as the hot hot hot spicy lamb tikka, mince kebabs and the vegetable curry too. Did I mention it's as cheap as chapatis with it being very tricky to spend more than £5. There's no booze, just plastic jugs of water on the table or cans. I love to cook Indian food, but usually it's vegetables and pulses and sometimes I get a real craving for the rich soothing flavours of the cumin, coriander, ginger and chili. The other day I came across a recipe which just hit the spot for me and I've cooked it tonight. Here it is copied word for word from The Guardian website: 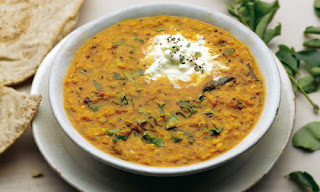 Photograph: Colin Campbell
This chill breaker is the ultimate antidote to any seasonal malady; I could eat mountains of it. Serve as a thick soup, or alongside plain rice or roti. Serves two to four.
200g split red lentils
1 bunch fresh coriander
1 small onion, peeled
40g ginger, peeled
3 cloves garlic, peeled
1 mild green chilli
1½ tsp black mustard seeds
4 tbsp sunflower oil
1½ tsp ground coriander
1 tsp ground cumin
½ tsp ground turmeric
½ tsp paprika
10 curry leaves
300g ripe tomatoes, peeled and chopped
2 tsp caster sugar
½ tsp fenugreek (optional)
1 pinch asafoetida (optional)
Salt
150g Greek yogurt
75g finely diced cucumber
1½ tbsp olive oil
70g unsalted butter
1½ tbsp lime juice
Wash the lentils in plenty of water, drain and soak in 350ml of fresh water for 30 minutes. Cut the coriander bunch somewhere around its centre to get a leafy top half and a stem/root bottom half. Roughly chop the leaves. Put the stem half in the bowl of a food processor, add the onion, ginger, garlic and chilli - all roughly broken - and pulse a few times to chop up without turning into a paste.
Put the mustard seeds in a heavy-based pot and place over medium heat. When they begin to pop, add the onion mix and sunflower oil, stir and cook on low heat for 10 minutes. Add the spices and curry leaves, and continue cooking and stirring for five minutes longer. Now add the lentils and their soaking water, the tomatoes, sugar, fenugreek, asafoetida and a pinch of salt. Cover and simmer for about 30 minutes, until the lentils are fully cooked.
Before serving, whisk together the yogurt, cucumber, oil and some salt. Stir into the lentils the butter, lime juice and chopped coriander leaves, taste and season generously with salt. Divide into bowls, spoon yogurt on top and garnish with coriander.
Now this is me again - I can't resist messing with recipes and this one is no exception. I've only just finished cooking it to the 'lentils are fully cooked' stage and it's switched off waiting for later. I'm going to stir in a couple of big handfuls of baby spinach leaves and also some tiny little pink prawns. I think that served with some lovely basmati rice it will be the perfect healthy, nutritious dish for a cold miserable night.

Later
It was delicious and this is what my version looks like: 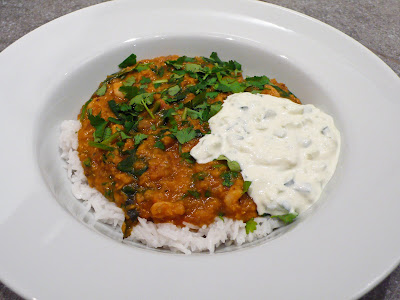