It's snowing again this morning and for the second time this week the BBC have been gleefully reporting the downfall of the nation's education and transport systems as millions of school kids are thrilled with the prospect of another day off. Mind you, when I was at school and it snowed there was no staying in bed as it was a boarding school and although lessons may have been off we were duly shoved out into the snow. For hours and hours. I recall on one occasion they actually locked the doors and we could sense the teachers closeted in their cosy staff rooms drinking tea from those odd green teacups and stuffing them selves with biscuits round the fire. It was always fun for a bit but as we wore archaic uniforms with cloaks rather than fleecy anoraks we were always half frozen and draped in sodden wool after a couple of hours. We used to get a small revenge by constructing massive snowballs and snow men in the middle of the lacrosse pitch, firmly compacted so that they would last for weeks after the Big Thaw and really pissed off the rather fierce games mistress. I think that's why I like the snow so much now. I only have to go out into it if I so desire and I can be as wrapped up as I wish.

Anyway, back to the creative arts and as far away from half arsed English snow as we can get with this lovely blue and exotic Treasury which greeted me this morning: 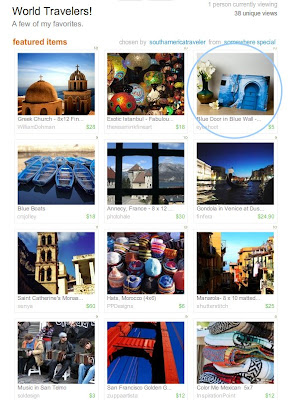 South American Traveler has a shop full of very nice travel photos and for some reason hasn't sold any.....anyway, here's my favourite one: 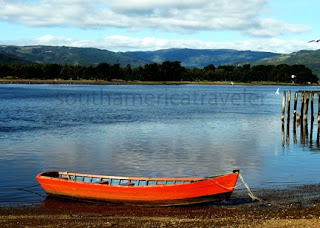 Fisherman's Canoe 5x7
There are some real gems in the selection with a few distinctly Moroccan photos and as you may have noticed, I do have a mild obsession with Morocco and it's always great to see how others see a place you love. I also really like the musicians in the bottom left by Sol Design, it's a lovely real depiction of street music although I'd say that at $3 is sorely underpriced. 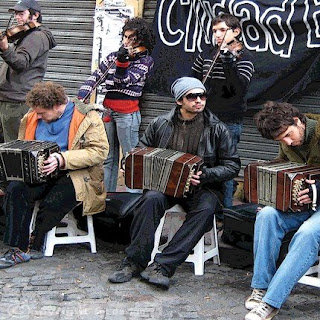 Music in San Telmo
Posted by eyeshoot at 9:06 am