But the season and having a life have got the better of me.

We're entertaining client's of Peter's tonight, there will be six of us which isn't to bad, but I don't like doing suppers in the week so if the occasion arrises, I always try to do something impressive but delicious. So this is what we're having:

Smoked salmon with cucumber and horseradish dressing.
Nice and simple, light and fresh.

Slow roast shoulder of lamb Moroccan style.
I love doing this, all you do is make a rub with butter, garlic, cumin seeds, ground coriander, hot smoked paprika, salt and pepper. Poke little slashes into the fat side of the lamb and using your fingers rub the lovely aromatic buttery mess all over the meat and savour the lovely smell. Cut up a couple of carrots and onions, squash some garlic cloves and fling into the bottom of a sturdy roasting tray, plonk the lamb on top and pour 500ml of boiling water around the lamb, avoiding the buttery dressing. Cover with foil and pop into your oven pre-heated at 150 degrees (for a fan) and set the timer for five hours. When it's cooked, leave to rest for 30 mins then shred all the delicious tender frangrant meat with two forks and your eager fingers. Arrange on a platter and rescue any juices which may be in the pan and cobble them into a sort of gravy, seive and dribble over each plate of meat. Yum yum.

Frozen berries with hot white chocolate sauce.
This is one seriously decadent pudding which has the advantage of being about as easy a pudding as you could wish for.
Melt equal quantites of quality white chocolate with double cream and serve in a pretty jug. Pour over plates of frozen mixed berries.
Enjoy and plan to get to the gym as soon as you can.

Then on Sunday we have Peter's aunt and uncle for lunch plus additional small child. Again I wanted simple and tasty and have gone for:

Spuds.
Probably mashed with some horseradish or grain mustard.

Pudding.
No idea yet.

Later
It's marmalade time!! Every year I really look forward to my marmalade making marathon and today in Sainsbury's I spotted the Seville oranges needed for the job and hauled them home along with a 5kg bag of sugar......

Here's the recipe I always use and my step by step photos of how it works. This is my most viewd and most 'interesting' picture on Flickr and gets tons of hits at this time of year. 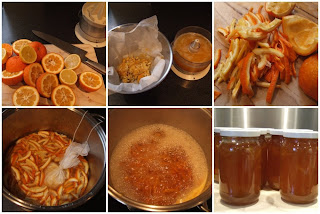 Begin by measuring 4 pints (2.25 litres) water into a preserving pan, then cut the lemon and oranges in half and squeeze the juice out of them. Add the juice to the water and place the pips and any bits of pith that cling to the squeezer on the square of muslin (laid over a dish or cereal bowl first). Now cut the orange peel into quarters with a sharp knife, and then cut each quarter into thinnish shreds. As you cut, add the shreds to the water and any pips or spare pith you come across should go on to the muslin. The pith contains a lot of pectin so don't discard any and don't worry about any pith and skin that clings to the shreds – it all gets dissolved in the boiling.

Now tie the pips and pith up loosely in the muslin to form a little bag, and tie this on to the handle of the pan so that the bag is suspended in the water. Then bring the liquid up to simmering point and simmer gently, uncovered, for 2 hours or thereabouts until the peel is completely soft (test a piece carefully by pressing it between your finger and thumb). Meanwhile, chill the saucers in the freezer compartment of the fridge.

Next, remove the bag of pips and leave it to cool on a saucer. Then pour the sugar into the pan and stir it now and then over a low heat, until all the crystals have dissolved (check this carefully, it's important). Now increase the heat to very high and squeeze the bag of pips over the pan to extract all of the sticky, jelly-like substance that contains the pectin. As you squeeze you'll see it ooze out. You can do this by placing the bag between two saucers or using your hands. Then stir or whisk it into the rest.

As soon as the mixture reaches a really fast boil, start timing. Then after 15 minutes spoon a little of the marmalade on to one of the cold saucers from the fridge, and let it cool back in the fridge. You can tell – when it has cooled – if you have a 'set' by pushing the mixture with your little finger: if it has a really crinkly skin, it is set. If not, continue to boil the marmalade and give it the same test at about 10-minute intervals until it does set.

After that remove the pan from the heat (if there's a lot of scum, most of it can be dispersed by stirring in half a teaspoon of butter, and the rest can be spooned off). Leave the marmalade to settle for 20 minutes.

In the meantime, the jars should be washed, dried and heated in a moderate oven for 5 minutes. Pour the marmalade, with the aid of a funnel or a ladle, into the jars, cover with waxed discs and seal while still hot. Label when cold and store in a dry, cool, dark place. Then hurry up and make some toast to try some!
Posted by eyeshoot at 3:58 pm