The Bread of Life - and snacks.

It was a long process yesterday to get my second Sourdough bake actually into the oven. The recipe I'd chosen was simple but there were seven hours of proving, shaping, resting and growing. I started a little later than I'd anticipated as I had to rush out to buy more flour and ended up in the slowest queue in the world at the shop which ultimately meant that the loaves didn't come out of the oven until 7.30pm and as they came out, I snapped a photo with my iPhone and we literally ran out of the door as our lift to the film had arrived. 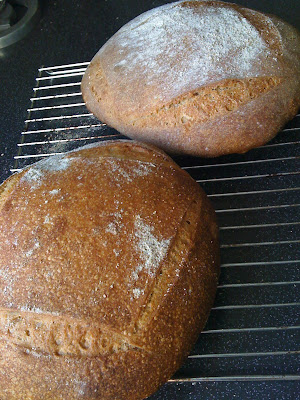 I was delighted with the loaves, they looked better than Number One, less dark and more shiny, with small air bubbles in the crust. I had to wait till after Juno to have a taste and it was yummy. Still with a nice rye sourness from the rye starter, but the centre was nice and softly chewy and the crust was delicious and crusty/crispy (is there a difference?). It made a delicious post film snack spread thickly with butter and Marmite! 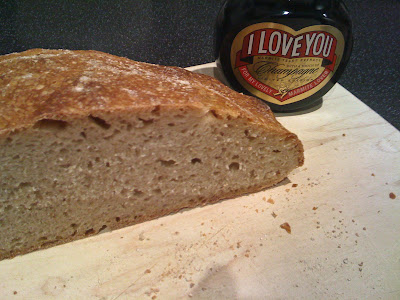