After the fabulous bubbling activity last night, it was painful to scoop out a large proportion of the surprisingly solid mixture and chuck it in the bin this morning. I've changed my measuring method to the less fiddly volume way and added one cup of rye flour and one cup of warm water, gave it a good mixing (it's a bit thinner than yesterday's, but still thicker than the earlier days) and marked the level with my red rubberband. It's now living in the kitchen rather than on top of my computer.....

I've covered it with cling film this time as a slight skin had formed over the bubbles which I didn't like.

So this is what the new gloop looked like at 10.00 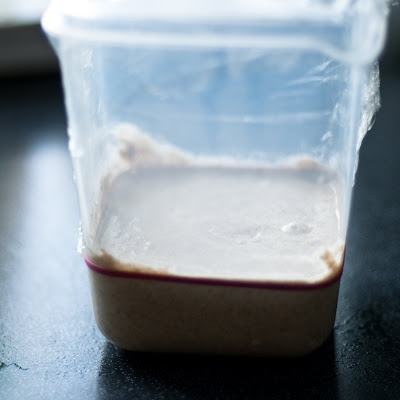 I need to know how long to carry on like this for before I can actually make some bread! I'm in danger of forgetting what the point of this experiment was to start with....