It's 4.30 so it must be time to feed my starter for the first time.

I've been observing the plastic tub of ash coloured nasty sitting atop my iMac with no great affection but with a great amount of speculation. It may be rather early in the game to be daydreaming about presenting delicious home made loaves of sourdough bread to friends when we visit along with a jar of my home made marmalade, but it has proved (seriously, no pun intended) to be a pleasant thought.

Things have warmed up a little on The Shelf this afternoon as the sun has come out and when I removed to lid to add today's feeding there were a few little bubbles, not very much, but a little is better than nothing especially as from my various readings, that's pretty normal especially as it's a bit cooler than the optimum temperature.

Stir the fresh flour and water into the ash coloured goo, cover and continue to let it do it's thing.

There's enough in the pot now for me to put a rubber band around the top of the starter so I'll be able to see if there's any action by tomorrow's feeding. 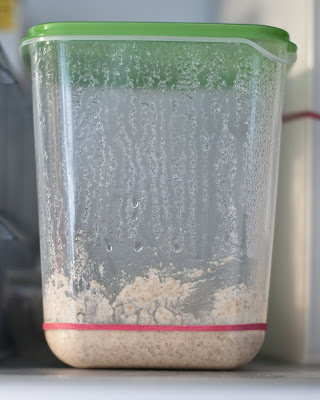