A Dead Box and a Pretty Treasury.

This is a really nice all photography Treasury, it's very well put together with complementary colours and a great mix of subjects:
Lens on Life
by South America Traveler 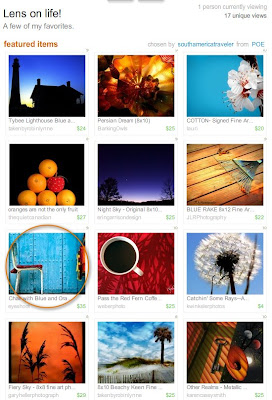 It's Bank Holiday Monday here in the UK today, so no work for anyone which is why I'm hoping that our local John Lewis will be open so that I can return our totally useless Digital Set Top Box by Thompson which finally gave up the will to live last night. After furious Googling I found out that it's a problem across pretty much all of the nasty little machines in the UK with them all showing the flashing lights of doom which signal an instant death. Apparently this untimely demise was caused by a new software download which basically cannibalised the machines and the company in charge are just saying to the customers who can be bothered to battle with their useless help line that the machines are dead and can't be fixed. Great. So I've lost the last four episodes of The Wire, two Damages and sprinkling of Heroes and possibly a Desperate Housewife or two. And that's just the dramas stuff, there's all the beautiful photography documentaries I was saving and the end of David Starkey's Henry VIII. I know it's only television but I love my television, it gives me hours of amusement and pleasure. So, fingers crossed that we'll get a refund and will come home with a brand spanking new digital recorder thingy. Then I'll have to spend the rest of the day getting it to work.