My first Sourdough starter has started.

• noun 1 leaven for making bread, consisting of fermenting dough, originally that left over from a previous baking. 2 bread made using such leaven.

I love to cook, as you may have gathered from my blog, but I'm not a baker, in fact, I'm not really a pudding person at all. I think I've made one traditional Victoria sponge in my whole life. Despite this, I have dabbled with bread making on and off over the years with my most successful phase being the time of my chef training. I had to take my turn in 'pastry' and a really enjoyed the magic of bread, but I was dissatisfied with the inferior ingredients we used and so I took my new found interest home where I made brown, white, olive, cheese, walnut and more, all of which were yummy. I didn't try sourdough, I don't think it even crossed my mind to try and we certainly weren't shown how to do it at college. Fast forward sixteen years or so and I believe my turn has come to give it a go. I have the taste for sourdough which has developed over the years, I have the time as I now work from home and I have the lack of funds which stop me from buying the artisan breads of which I've become so fond.

After consulting many books, blogs and websites I've gone with the starter recipe by Andrew Whitely who was the founder of the fantastic Village Bakery in Melmerby in Cumbria. The Village Bakery was an early haven for 'real' wood fired bread which I discovered when on a wheat free phase and I became addicted to several of his breads, in particular the Borodinsky and the Rossisky Russian Ryes. I visited several time to lunch on home made soups, sausages, breads and cakes and would always come home with a boot full of edible goodies! I was lucky to go behind the scenes at the bakery while recording some radio adverts for Booths Supermarkets which were (and still are) one of his early big stockists and it was a fascinating pleasure to see the big wood fired oven and all of the skill, experience and work which went into every single loaf. So of course I had to buy his book and as I don't (didn't) bake, I very generously gave it away to a friend. So it was to her I turned for a photocopy of the starter recipe which I've started today.

This is what you do. 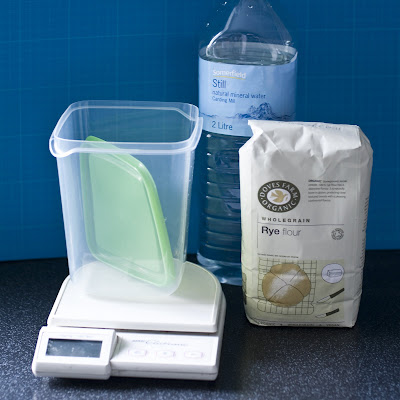 Mix the flour and water into a sloppy paste in a plastic tub. Seal the lid and keep as near to 30 degrees C as possible for 24 hours. 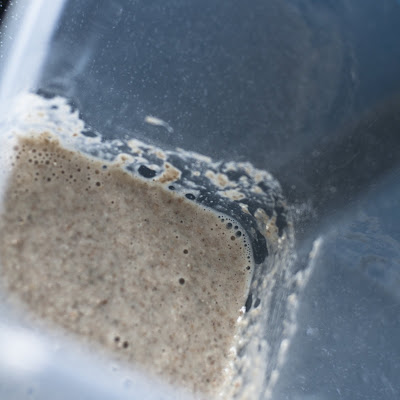 Not really the most attractive food photo I've ever taken!

So far, so simple except for the fact that I've nowhere anywhere in the flat which reached 30 degrees - this is a rainy early summer in the north of England I the heating is switched off for 'summer'. I've been lurking around in what I thought were the few warm spots with my newly purchased thermometer and have found that the warmest spot is actually on the metal shelf above my computer. 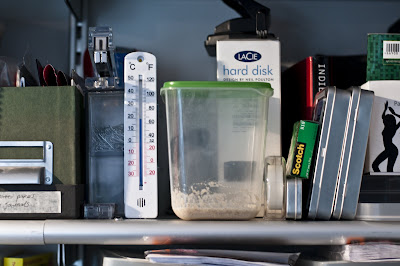 An unexpected addition to my work space!

While I obviously hope for some serious activity with my starter, I really don't want it to be so active that I have to cope with a yeasty explosion. That could be really nasty. So here it sits, above my desk where I spend most of my days with the temperature at the moment at 24 degrees which isn't so bad, it will just take a little longer. At least I'll be able to keep an eye on it's progress as this is where I spend most of my time.

I'll leave it alone now until about 4.30 tomorrow when I'll 'feed' my fledgling starter.