Last night's Italian supper was a great success, despite not going quite to plan.

We scrubbed, cleaned, hoovered, tidied, shopped, cooked and faffed pretty much all day - I even fitted in a lovely 'early' morning run in Alexandra park in the cool sunshine so all was good.

It's one of those meals which is very easy but somehow extremely time consuming to prepare. Friends popped round at 4 for tea and to plan a possible trip to India in September, which turned into g&ts and they didn't leave till after midnight, so that was two extra for supper, but the food was such that it didn't really matter and it was lovely to add them to the party. After a brief rest for g&t time I got back to my kitchen and worked solidly for a couple of hours and then it was all done. The vegetables had been grilled, dressed, mixed and artfully arranged on their platter, the mushroom risotto had been prepared as far as I could without getting to the rice stage, so dried porcini reconstituted, rinsed and dried, field mushrooms, chopped, fried and cooled, herbs chopped and mixed, onion and garlic prepared, home made chicken stock seasoned and measured, Vermouth measured, lemons squeezed, mushroom juices strained, asparagus trimmed and char grilled and Parmesanned, cured meats prettified on platters, radished chilled and de-gritted and mozzarella torn into chunks. I think that was about that for the savoury stuff. Ice cream was doctored - stem ginger chopped, ice cream softened and ginger added, back in the freezer, rhubarb roasted (Peter did that, I don't do rhubarb).

Then the next four guests arrived bringing with them vast amounts of wine and we had the first Pimms of the summer in the sunshine on the terrace. The one extra guest who'd been invited late on in the week, didn't arrive and then continued to not arrive. So we ate the antipasti - every last delicious bit of it, there's not one slice of salami left, and then we moved on to the mushroom risotto. This is always a labour intensive dish and you really shouldn't make it if you don't want a bit of down time in the middle of the evening to do 30 mins stirring and ladeling. So I stirred and ladled and added the delicious mushrooms, an indecent quantity of butter and Parmesan and the delicious Vermouth. I think it was one of the best I'd ever made, seriously decadent. We ate all of it and then our last guest arrived, in fact he had turned into two guests. And there was no food left, nothing, no salad, no antipasti, nothing. Rather awkward and embarrassing for me to have no food for guests, but it was after 9.30, they said they had already eaten and seemed happy with their wine and bits of bread and anything they could find. What we did have was pudding, and they had bought a massive tray of Baklava which is always a great gift for a dinner and a tasty bunch of grapes. Pudding was excellent, the rhubarb rich and sticky and the icecream soft and gingery. Yummy.

The evening was a great success and I hope enjoyed by all!

I remembered to take a photo of the table before it was messed up but forgot to snap anything else - as usual! 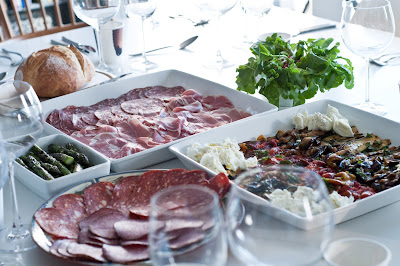 We're off to a wedding in the Trough of Bowland in a few hours, two great friends are getting hitched and we're all staying overnight in a beautiful country inn where I've wanted to stay for years, so we're really looking forward to that. It's a gorgeous day and it feels like we're on holiday!