So after nine days of fun with starters, I'm getting down to the real business of making the dough which I'll be baking tomorrow morning.

This is what I've done today.

(Many thanks to Jack Lang for his wonderful instructions which I've followed to the letter - my annotations are in italics, the other words are his)

Just before leaving for my yoga class I refreshed my starter: 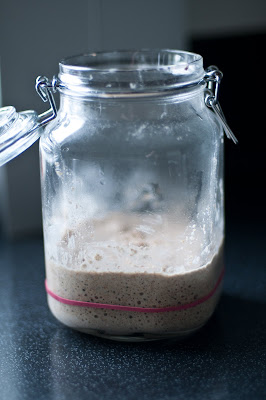 A good, healthy bubbling active rye starter, ready to be put to work.
Got back from yoga, had breakfast, sorted out my recipe then got on with the dough:

After 4 hours or so, it should be bubbly - it was, more than twice it's original size - it's magic!

1 cup refreshed sourdough starter - I just about had this much, so I'm very glad that I retained my excess starter from last night else I would have to start again from scratch next time.
3 cup Strong white bread flour - Doves Farm Organic Strong White Flour
1 cup water - Manchester Tap
2 tsp salt
The easiest way is to whizz together refreshed starter, flour and water (but not the salt yet) in a food processor for 20 secs - I did this with the knife blade, it was super fast! 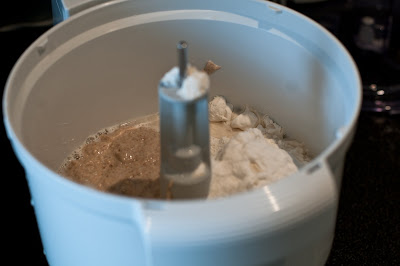 Flour, water and starter before being ruthlessly whizzed into submission. 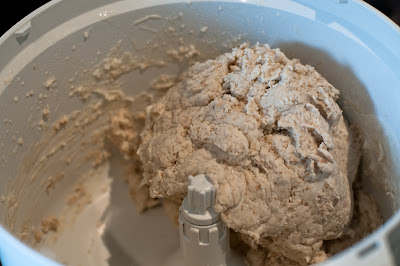 After being whizzed into submission.
Should make a softish dough. The wetter the dough the bigger the holes in the final bread. Different flours need different amounts of water – add more water or flour to get the right consistency. I didn't need to add any more.
If you are making the dough by hand then knead for 10 minutes by the clock. Be rough with it. Lose your temper with it. Take out your frustrations on it. Slam it about. When it is properly kneaded it should feel resilient to the touch. It has been described as feeling like an earlobe, but I describe it like feeling a soft breast or buttock.
You should be able to take a pinch of dough and stretch it so thin you can see through it – called the “windowpane test”. When kneaded the dough will stretch without breaking
You cannot over-knead by hand. It is possible (but quite difficult) to over-knead if you are using a mixer or a food processor, as the dough can get too hot, and if worked too long and hard the gluten will begin to break down.

I was going to use my mixer and bread hook, but it just seemed to be moving it around the bowl rather than giving it a good kneading, so I removed my watch and ring and got down and dirty with the dough for ten minutes. It was a bit sticky so I was adding small amounts of flour on and off, it would be lovely for a bit and then suddenly get sticky which was interesting. Anyway, it was very therapeutic! 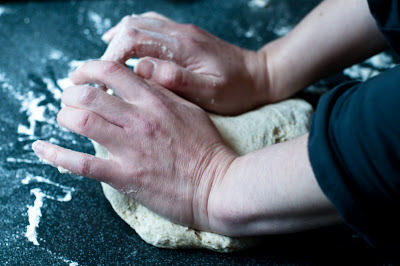 Proof that I did the hard labour! 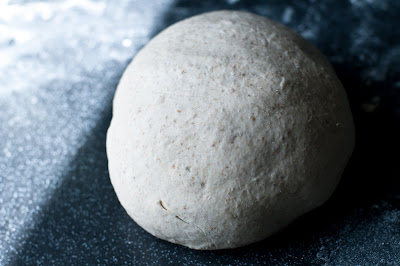 Gather it together, and wipe a little oil over the surface to stop it sticking, cover it and leave it in a warm place for 30 mins.
This pause, before the salt is added, is for several reasons:
- It lets the enzymes do their stuff. They begin breaking down starches into sugars to feed the yeast to make a better crust colour. Salt tends to retard this reaction.
- It lets the dough (and you) rest and relax after the exertions of kneading.
- It allows the flour to complete its hydration, High levels of salt can interfere with this.
- It allows time for you to prepare your “banneton” to receive the finished dough.
See Preparing Your Banneton below.
After 30 mins add the salt and whiz for another 20 sec, or knead for another 10 mins. Oil, cover, and leave for 2 hours or so in a warm (85F/29C) place. The exact time is not critical – anything from about 90 minutes to 3 hours will work. Temperature is more critical than time.

I use grainy Maldon sea salt so I measured out the two teaspoons which seemed like masses and gave it a scrunch with my fingers to break it down a bit, then I sprinkled it into the dough as I kneaded. It was softer and more elastic and sort of smoother. I had to put a little flour on my hands a couple of times, but it generally behaved very well. 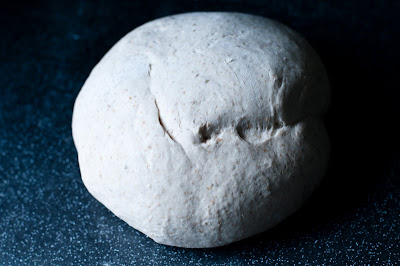 After the second ten minute workout - now with added salt. 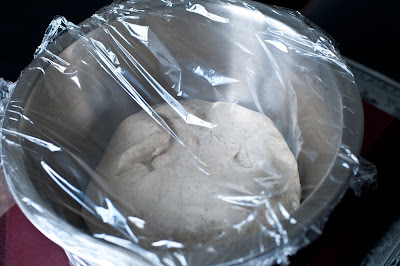 This is the size of the dough before it's nice long rest. And mine. 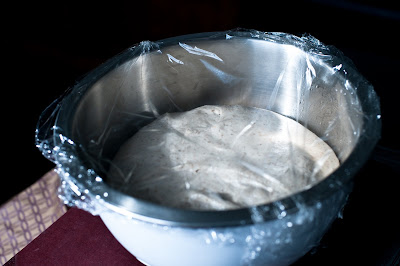 And this is the size of the dough after about 1 and a quarter hours
The dough will have expanded a bit. Don’t worry about whether it has doubled or not. I think it's almost doubled! 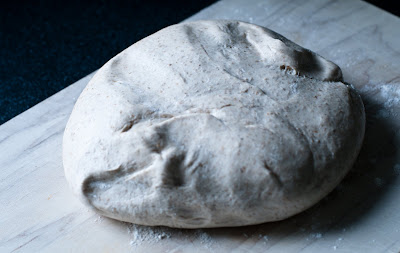 Straight out of the bowl.
Turn out onto a floured board. 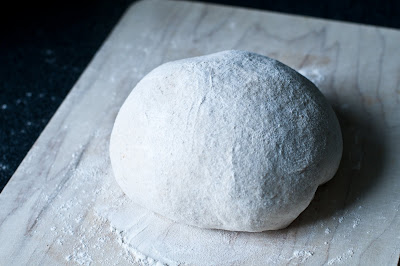 After gently folding into a ball.
Now handle gently - don’t knock all the air out. The time for rough handling is over. Take the sides and fold to the centre.

Folding the dough like this (you can also fold top to bottom as well) gently stretches the gluten and the bubbles forming in the bread. Turn the dough over and shape into a ball. As you shape it try and stretch the surface a bit so it is taut.
Put it upside down into a cloth lined bowl. The top of the dough in the bowl will be the bottom of the finished loaf. Don’t worry if the top surface of the dough in the bowl is uneven: it will even itself out. Put into the fridge, covered with a cloth, overnight. 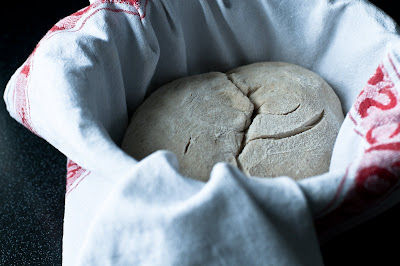 Off to sleep in the fridge. The crease will be on the base of the loaf.
Tune in tomorrow for the final thrilling installment!